What the Google Chromecast Is … And Isn’t

Google has plans for the Chromecast, and they may not be the same as yours …

There is a bit of an uproar today, centered on the Chromecast and Koush’s experimental AllCast application. A little background for those who haven’t been following along.

Developer and noted Android hacker Koushik Dutta hacked a method to play local content, as well as content from Google Drive or Dropbox from your Android on the Chromecast. The supplied APIs from the developer preview of the Google Cast SDK don’t offer this functionality, so he had to do some magic and work around it. He did, and it looked pretty interesting to a lot of people who wanted a way to connect their Android to their TV. Today Koush announced that the latest update broke this functionality, and that he suspects Google is blocking this sort of behavior on purpose.

That’s a bit of a sticky mess, and no answer is going to satisfy everyone. Maybe Google should just sell a Miracast dongle through Google Play, make it cheap, and be done with it. I don’t have an answer, but I do have some food for thought, and there’s two very important things that need remembered in any discussion about Chromecast abilities and use cases.

The Chromecast is not open 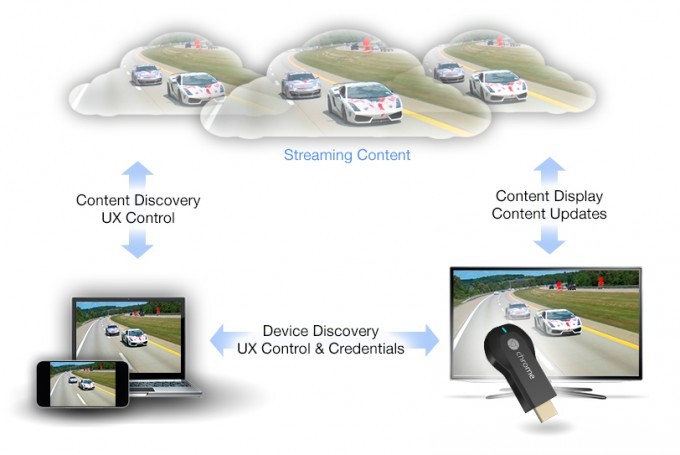 The Chromecast is not Android. It’s also not Chromium. It was never offered as an “open” product. What it is is a $35 device that lets you play content from YouTube, Netflix and the Chrome browser with very little setup or difficulty. Google has said that other cool stuff will be coming to the Chromecast, but they never once said it would be open and hackable.

In fact, making a device like this open and hackable will hurt it’s future. Content providers are afraid of Android. When people can take a few hours and do things like crack open an app so it works in ways it wasn’t intended, the people who control the flow of entertainment get scared. They aren’t afraid of the Xbox, or the Apple TV, because people aren’t modifying the software on these right and left. They care about revenue, and things that can take away any of it get them jumpy. Google has to try and appease these folks, and whether we like it or not that means clamping things down.

The SDK is not final
Apps like Koush’s AllCast/AnyCast worked outside the scope of the SDK, and nobody should be surprised if they get broken. But the Google Cast SDK itself is still very much a work-in-progress.

Related to this discussion, developer Leon Nicholls has found code ready for casting local content from Android buried in the developer preview of the SDK. Google hasn’t released an app that will cast from your gallery, but they have everything in place to do so. It’s possible they will, but it’s just as possible that it will never happen.

This points directly back to the fact that the Chromecast isn’t open. Google is holding things tight here, and we assume it’s to satisfy folks at TV networks and movie studios, and those lovable people who control the music industry. In any case, people using the SDK and testing their own apps that use the supplied APIs aren’t saying that any updates broke their apps.

Now what?
The Chromecast does everything today that it did when Sundar and friends showed it to us last month. Back then, people were excited and it quickly sold out. Nothing has changed.

If you want something to stream content from your Android to your TV, invest in a Miracast dongle, or if your device uses a proprietary format like HTC or Samsung, use one of their devices. Or just use an HDMI cable and any adapter you need for your Android. Don’t buy a Chromecast expecting it to cover all the bases, because they may never do so.

On the other hand, if you want a cheap and easy way to play YouTube and Netflix (and other content as it becomes available) on your TV, grab a Chromecast. It’s easy, it works well, and we think Google has deep pockets and big plans for further development and improvement.